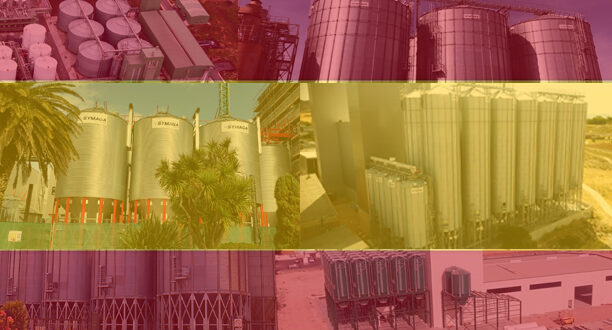 Exporting more than 90% of production is SYMAGA’s DNA. Since its beginnings, there has been an eagerness to export, which in a few years has materialized in figures that are growing steadily to reach 96%. However, the SYMAGA brand in Spain has a low recognition within our borders.

With the new millennium, big projects started in our country, the first one in the year 2000 from Cooperativa La Encina, in Palazuelo, who asked us for 6 SBH1223/14 silos for cereal storage and an extension a few months later. In 2001, we supplied Bühler with 58,188m3 for Abengoa’s bioethanol plant project in A Coruña. Seville will be the next location for Intermalta’s malting plant. In 2016, Maltería La Moravia entrusted SYMAGA with the manufacture of six 1298/19 silos, and in the same year, 35 kilometers from our factory, silos were supplied for the manchega alcohol plant Alvinesa.

In the last two years, the Spanish market began to increase the number of m3 of storage manufactured by SYMAGA, with the following projects standing out: Estrella Galicia entrusts SYAMAGA with the supply of 8 hopper silos to expand the brewery in A Coruña. Iberoquinoa’s new plant in Antequera will have 4 hopper silos SCEX1070/13T45EC and Cincaporc expands its feed factory in Fraga. A few kilometers from our factory, the assembly of 22 hopper silos for the Inalsa feed factory in Ciudad Real has been completed. A few months ago orders were confirmed from DCOOP for the silos that will store the almonds in the processing plants in Cordoba and Portugal. Our flagship project in Spain in recent years is Panificadora Conquense with the assembly of 25 hopper silos for the new mill. This inertia in the Spanish market will continue in 2022 with the projects for Legumbres Pedro and Jusegal.

The goal is to maintain the growing trend in the domestic market, in order to consolidate our position in the country where SYMAGA has its origins, without forgetting the maintenance of consolidated sales areas and the conquest of new countries. The strategy of coexistence of export and international presence with the national one will enhance the recognition of our brand inside and outside our borders.

This website uses cookies so that we can provide you with the best user experience possible. Cookie information is stored in your browser and performs functions such as recognising you when you return to our website and helping our team to understand which sections of the website you find most interesting and useful.

Strictly Necessary Cookie should be enabled at all times so that we can save your preferences for cookie settings.

If you disable this cookie, we will not be able to save your preferences. This means that every time you visit this website you will need to enable or disable cookies again.

This website uses Google Analytics to collect anonymous information such as the number of visitors to the site, and the most popular pages.